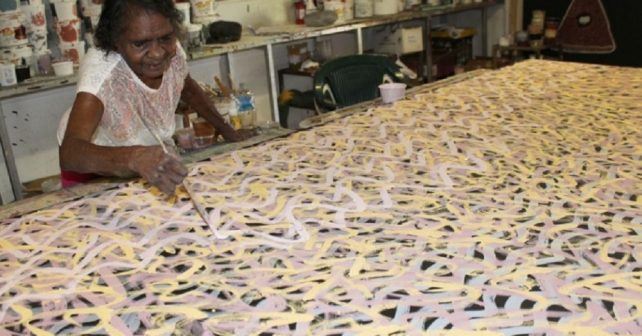 For a fresh take on native Australian art try this new exhibition which contrasts top painters from Up Here (the UK), alongside those from Down Under.

Earth, Wind and Fire celebrates indigenous Australian artists in addition to British virtuosos. The display focuses on the craftsmanship used by the painters – both traditional and modern –  from opposite ends of the earth.

It promises a fresh look at aboriginal art and its rich tradition going back tens of thousands of years. Aussie artists to look out for include 78-year-old painter Kittey Malarvie (pictured above) who started out carving dishes and selling them to tourists, as well as octogenarian Lily Hargraves who paints traditional aerial landscapes of the Northern Territory where she grew up. British artist Sigrid Holmwood’s work featuring European peasant culture will also be on display