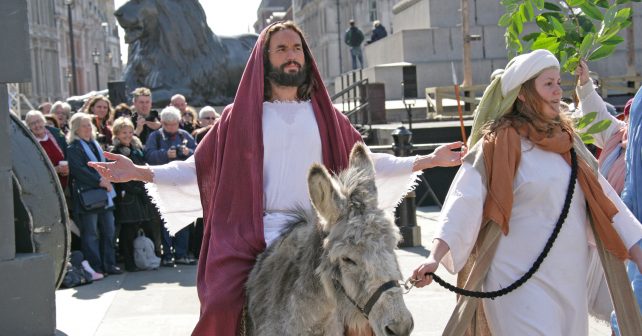 It’s become an annual Easter event and this year The Wintershall Players return to Trafalgar Square to re-enact their epic portrayal of the Passion.

In the Christian calendar, Good Friday is the day that Jesus was arrested, tried and crucified by the Romans before rising from the dead (the resurrection) on Easter Sunday.

The 100-strong costumed cast – along with donkeys, doves and horses – is made up predominantly of volunteers and stars professional actor, James Burke-Dunsmore

He’s a veteran Jesus, having played him in over 60 productions across the country. To stop himself getting jaded he makes his own crown of thorns before each performance.

He also has to stay in character no matter the audience reaction or what happens in the performance. Once another actor nailing him to the cross for the crucifixion scene accidentally struck his leg with a hammer. When James cried out in pain the audience thought it was ‘Jesus ‘ and part of the plot; in fact, the hammer had fractured his leg.

Get there early to grab a space. London at Easter rarely boasts Jerusalem weather but last year over 20,000 people attended the two performances.